Aren’t pleasant surprises a delight? Neither of the subjects covered in this blue-themed entry were ones that I was expecting to like nearly as much as I did. One was acquired quite close to home, while the other was quite a journey. Let’s jump right in and take a closer look at this pair of blue(s) brothers… (sorry, I couldn’t resist!)

If you live in Canada and grew up in the 20th Century, you know the name Eaton. Eaton’s was a chain of department stores that crossed the country, not unlike The Bay, Simpsons, and Sears. The only one of those left in Canada now is The Bay, which illustrates how much the retail landscape has changed in twenty years.

Timothy Eaton founded his initial store in 1869 on Yonge St. in Toronto. By the middle of the next century, Eaton’s was the dominant retailer in Canada. In 1977 they opened the Eaton Centre in downtown Toronto, and although the company went bankrupt at the end of the last century and is no longer in operation, the mall still bears its name. (I pass it daily on my way to work.) Another Eaton Centre still exists in Montreal, I believe.

Eaton’s was a fixture in my youth. As a kid I delighted in getting the Eaton’s “Christmas Wish Book” catalogue. My mother worked for Eaton’s for a time.  Hey, they even started Toronto’s annual Santa Claus Parade way back in 1905!  So imagine my delight I discovered that there were Eaton-branded typewriters. 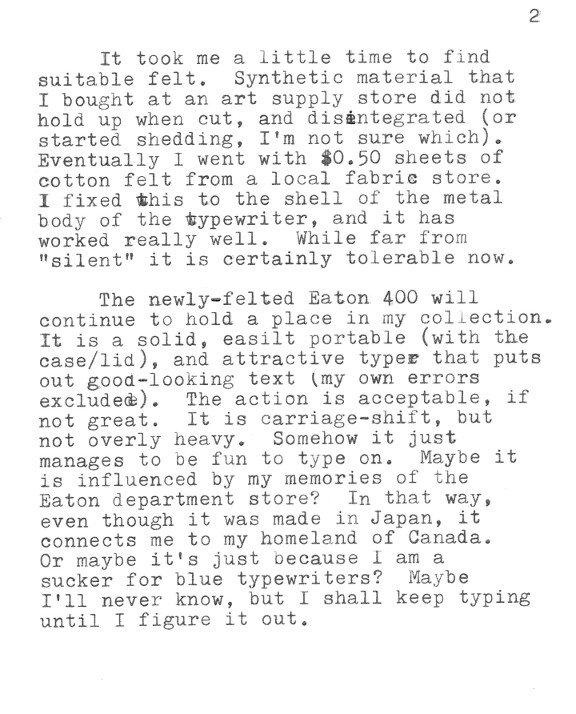 I should note that my love of this pretty little blue typer seems to have fostered a (possibly bizarre) interest in typewriters re-branded by department stores… But we’ll get to that in future updates.  😉

It was through this typewriter that I learned of Silver-Seiko, the Japanese manufacturer of a great many re-branded machines. They are perhaps best known for the Silver-Reed brand, but it’s astonishing how prolific they were, and how many fascinating shapes, colours and names their mechanism appears under. They are not unlike Brother, in this respect. And like Brother, these seem to be tough, rugged typers, though very often lacking many features, likely in an effort to cut costs as much as possible.

Of particular assistance in making this Eaton 400 tolerable by adding the felt was baesun’s Of Type and Ink entry on Refelting an Olympia SM3, which outlines techniques that could be applied to a great many different sorts of machines.

Our next blue subject is the quite strong Smashed Blueberry from the Shipyard Brewing Co. from the beautiful State of Maine.

Whereas the beautiful, blue Eaton 400 was found just a short drive away, this blue beauty was found in its home State. Initially I almost passed on it, as I am not much interested in fruit-style beer. But I do like big, strong beer, so I gave this one a shot. I was very happy that I did!

I shared this big bottle with my friend Jamie, and upon pouring it we were nearly knocked over by the aroma of blueberries. There was no doubt to be had – this really was a blueberry beer!  I tentatively took my first sip, fearing a sweet, fruity flavour that had been ramped up to 9%, and…

Wow, this tasted nice!  I took a bigger swig to better appreciate it, and to confirm my first impression – there was almost no berry in the flavour.  This was a really nice, full-bodied ale with flavours dominated by wonderfully balanced malts. When reading the back of the bottle, I instantly saw the resemblance to a Scotch Ale – but a very big one, at that!

Shipyard Brewing Co. was established in 1992 as one of Maine’s original Brew Pubs. Now the brewer has grown to the point that their beer is widely available across New England, and exported to 40 other States. I was really impressed with this bottle, and am looking forward to trying another Shipyward brew, currently resting in my fridge. With luck maybe our provincial liquor control board, the LCBO, will bring some distribution to our humble province.

Until next time, drink & type responsibly!

View all posts by jay

This site uses Akismet to reduce spam. Learn how your comment data is processed.